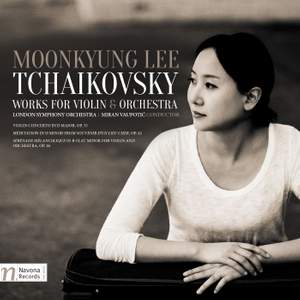 While speaking on Édouard Lalo’s Symphonie Espagnole, Op.21, Pyotr Il'yich Tchaikovsky posited that his colleague “does not strive after profundity, but carefully avoids routine, seeks out new forms, and thinks about musical beauty more than observing established traditions.” Acclaimed violinist Moonkyung Lee endeavors to emulate this approach on her Navona debut Tchaikovsky – Works for Violin and Orchestra, in which she presents several performances of beloved Tchaikovsky alongside the London Symphony Orchestra under the baton of Miran Vaupotić. Lee finds particular success in this regard with her performance of Violin Concerto in D Major, Op.35, elevating several of the work’s unorthodoxies to the foreground. Her bow breathes new life into the unusual cadential sections in the first movement, its song-like Canzonetta second movement, and the Russian folk-infused finale. The album also includes a performance of the Méditation, a piece originally written as a middle movement for the violin concerto before its inclusion as the first movement of the Souvenir d’un lieu cher (Memory of a dear place), Op.42. Its nostalgic emotions are quintessential Tchaikovsky, and its subsequent popularity has led to presentations as a standalone piece. Lee chooses to perform an arrangement for violin and orchestra made by Glazunov in 1896. Finally, the violinist seizes the Sérénade mélancolique in B-flat minor, Op.26, Tchaikovsky’s first work for violin and orchestra. Like the Méditation and the violin concerto, it is filled with the intense emotion intrinsic to so much of his music. Lee singles out the end of the piece as particularly magical, lauding the moment “when the fragmented theme is reiterated by the clarinet and the solo violin in absolute stillness.”