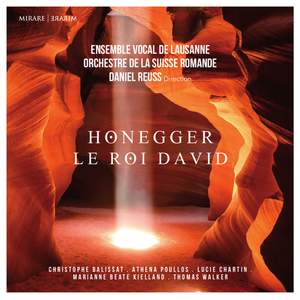 There are some ravishing moments, and it is given a polished performance — BBC Music Magazine, September 2017 More…

With 'Le Roi David', written when he was less than 30 years-old, Honegger produced one of his first great masterpieces. The piece has a Stravinskian bite and primitivism, while also revealing Honegger flexing his compositional muscles, even creating an effective Sprechstimme melodrama scene for witch and orchestra. In 27 numbers overflowing with astonishing musical invention, the oratorio brilliantly recreates a distant biblical past in a resolutely modern hybrid of Middle Eastern-influenced music which can sound, to modern ears, like Miklós Rózsa’s much later film score to'Ben-Hur'. It enjoyed immediate and lasting popular success.

There are some ravishing moments, and it is given a polished performance

Narrator Christophe Balissat has a lush French voice to lose yourself in, and his swimmable tones suit the piece well … The chorus is the mainstay of the work, however, and it is lively and engaged throughout. The intimacy of the acoustic suits them very well, and their blend with the instruments is just right, especially in the big climaxes that end each part

Honegger’s oratorio might feel like a 1920s period piece, but Reuss’s full-hearted account with the Suisse Romande orchestra and the Ensemble Vocal de Lausanne restores its experimental flavour, not least in using the original scoring for 17 instruments.

The work is far removed from conventional notions of what a biblical oratorio is. Reuss’s performance is no-nonsense and direct, with excellent contributions from the Suisse Romande players and Ensemble Vocal de Lausanne. There’s suitably restrained narration from Christophe Balissat, with Athena Poullos a bit more histrionic in the other spoken role of the Prophetesse.

solo singers are uniformly excellent (especially mezzo Marianne Beate Kielland). Reuss paces the drama perfectly and is well served by his engineers. Anyone unfamiliar with this work now has no excuse