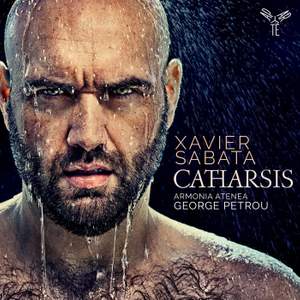 The music-making is never devoid of interest and richness, but it is at its most persuasive when the performers let the music speak more naturally — Gramophone Magazine, May 2017 More…

Ahead of his Wigmore Hall debut tonight, the countertenor talks to Katherine about his career and the inspirations behind this evening's programme (which was released on Aparté earlier this year).

Around the year 1600, a group of Florentine aristocrats, inspired by ancient Greek drama, gave birth to opera. It was intended to move and glorify human passions in such a strong way that the spectator's soul would be cleansed of these passions in a process that Aristotle called 'catharsis'. Xavier Sabata, in his 3rd solo album for Aparté, grasps the cathartic mettle.

Sabata has rapidly established a reputation as one of the leading countertenors of his generation. Born in Avià, Catalonia, he trained as an actor at Barcelona’s Institut del Teatre, perfecting his vocal technique at the Escola Superior de Musica Catalunya and at the Musikhochschule, Karlsruhe, where his teachers were Hartmut Höll and Mitsuko Shirai.

The Greek conductor George Petrou studied piano in Athens and at the RCM and RAM in London. He has gradually turned to conducting and is establishing a flourishing international career. He is the artistic director of the renowned Athens based Orchestra Armonia Atenea, with which he tours and records extensively, performing both on period or modern instruments.

The music-making is never devoid of interest and richness, but it is at its most persuasive when the performers let the music speak more naturally

Countertenor Xavier Sabata demonstrates his marvellous voice, which is radiant with a bright decisive, steely tone, although there is also warmth…he has a special ability for deep expression that makes me believe every word he sings, together with his ability to move the listener...lovers of early music will find plenty to relish here

[Xavier Sabata] starts with the considerable asset of a well-formed and appealing tonal quality which, combined with evident musical intelligence, ensures his singing of lyrical music is unfailingly rewarding, especially since he also boasts an excellent messa di voce

a supple, communicative voice that is honeyed and forthright by turns.

Sabata's voice is as accompolished as ever, unfaxed by any flourish thrown at him, and relishing his long-spun phrases. Georg Petrou conducts with passion, though sometimes brashly exaggerating dramatic effects