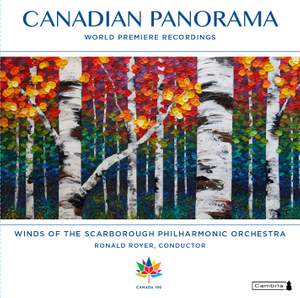 Cambria Master Recordings is pleased to announce Canadian Panorama, a new release of world premiere recordings by prominent, contemporary Canadian composers in celebration of Canada’s 150th birthday. The recording features The Winds of the Scarborough Philharmonic Orchestra under the direction of Ronald Royer, with Sarah Jeffrey (oboe), Gabirel Radford (horn) and Kaye Royer (clarinet). The variety of musical styles and influences represented in the works featured on this recording reflect the rich diversity of contemporary Canadian composition and will appeal to a broad audience interested in classical music. A unifying feature of the eight compositions is the inspiration each takes from the musical influences of the past. Four works are commissions by the SPO for this project. The compositions Fundy, Saturday Night at Fort Chambly, and McIntyre Ranch Country are each inspired by different regions of Canada and their local folksong traditions: the East Coast, Quebec, and Alberta respectively. The new works Allemande and Whirligig illustrate the ways in which European classical music has inspired Canadian composers to create new, colorful works. Rhapsody and Travels with Mozart are inspired by the rich cultural diversity of Canada. And finally, Serenade pays tribute to Canada’s vibrant film industry and culture.