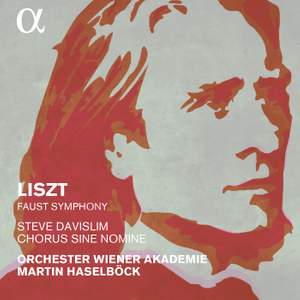 [Haselböck] reveals aspects of Liszt’s scoring that would otherwise go unnoticed…you being to understand Liszt’s sound world as he understood it…beautiful singing by Steve Davislim — Gramophone Magazine, May 2017

The Faust Symphony undoubtedly constitutes one of the principal works of Liszt’s Weimar period, if not indeed his orchestral masterpiece. Liszt had become acquainted with Goethe’s poem Faust in 1830, in the French translation of Gérard de Nerval. He began composing the work in the 1840s, after a visit to the Goethe House in Weimar. Its first performance was arranged for September 1857, to mark the centenary of Grand Duke Carl August and the erection of a statue to Goethe and Schiller. On this occasion Liszt rounded the work off by adding a tenor solo and chorus at the end. The premiere took place on 5 September. This musical transposition of the poem is performed here by Orchester Wiener Akademie under Martin Haselböck, and follows their recording of Liszt’s transcriptions of works by Schubert, released in 2015 (ALPHA471). In parallel with this, the Viennese period-instrument orchestra is also continuing its Resound Beethoven project, the recording of the complete symphonies at the venues of their first performances.