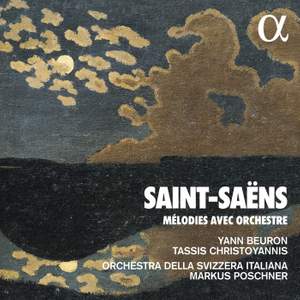 The singing of both artists is of the highest class with not an ugly or unexamined note anywhere. Every word is audible and the characters of the songs are, for the most part, delineated with... — BBC Music Magazine, August 2017, 4 out of 5 stars More…

Although the turn of the twentieth century marked the golden age of French song, the genre was generally accompanied on the piano and only rarely orchestrated by its composers.

But Camille Saint-Saëns, a great lover of poetry, was also a champion of the orchestrated mélodie and the French coloristic style. He also wanted to counterbalance the overwhelming popularity of operatic arias in concert programmes. An immense admirer of Victor Hugo, Saint-Saëns set many of his poems to music, including L’Enlèvement, Rêverie, and Le Pas d’armes du Roi Jean, regarded as one of his masterpieces.

Exoticism and a certain sense of the supernatural run through such songs as Danse macabre, one of the most popular pieces of classical music, but always heard nowadays either in its version for orchestra alone or performed by a singer with piano accompaniment. Of the twenty-five mélodies with orchestra listed in the catalogue of Saint-Saëns, nineteen are recorded here, all of them for the first time!

With interpreters of the calibre of Yann Beuron and Tassis Christoyannis, the words are perfectly served here and the composer’s coloristic talents heard from the very first bars.

This disc is a genuine event that enables us to rediscover a whole segment of the history of vocal music, a renaissance made possible by the Fondation Bru Zane.

The singing of both artists is of the highest class with not an ugly or unexamined note anywhere. Every word is audible and the characters of the songs are, for the most part, delineated with care.

Beuron, who has a remarkable ability to sustain soft high notes without sliding into falsetto, is impeccably stylish throughout…Christoyannis sings…with a velvet sensuality…conducting and playing are faultless. It's a very fine disc indeed.