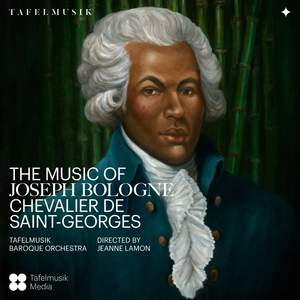 Tafelmusik Baroque Orchestra proudly presents the soundtrack for the re-release of Le Mozart Noir, an award-winning film that uncovers the mystery around Joseph Boulogne, Le Chevalier de Saint-Georges, a Black eighteenth-century violinist and composer. The son of a French owner of a plantation in Guadaloupe and a Black slave, Saint-Georges overcame adversities of class, race, and prejudice to become a highly regarded musical figure in pre-Revolutionary Paris. Saint-Georges also possessed remarkable skills as an accomplished athlete, swordsman, and military man who led a troop of 1000 Black soldiers known as the “Légion Saint-Georges.” Through dramatic recreations and interviews with expert musicians and musicologists, Le Mozart Noir portrays Saint-Georges’ rise to prominence as one of France’s most popular heroes, and his tragic fall from history. Le Mozart Noir offers a window into the spirit of this remarkable historical figure and features the music of Saint-Georges, along with works by his mentors Jean-Marie Leclair and François-Joseph Gossec, performed by Tafelmusik Baroque Orchestra under the direction of Music Director Emerita Jeanne Lamon. The soundtrack includes instrumental excerpts from the opera L’amant anonyme, the Violin Concerto in D Major, op. 3, no. 1, and the Symphony in G Major, op. 11, no. 1 by Saint-Georges; the Allegro from the Violin Concerto in F Major, op. 10, no. 4 by Leclair; and the Symphony in D Major, op. 5, no. 5, “Pastorella” by Gossec.