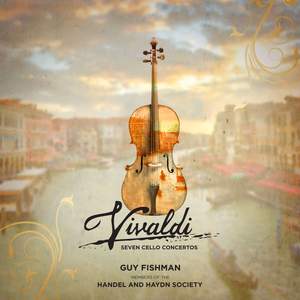 Guy Fishman, principal cellist of the Handel & Haydn Society Orchestra, presents a brilliant and energized period-instrument performance of seven miraculous and seminal concertos by the Red Priest, Antonio Vivaldi. Fishman made his Symphony Hall solo debut in 2005, and is in demand as an early music specialist in the United States and Europe, performing in recital and with Arcadia Players, Querelle des Bouffons, Boston Baroque, Apollo’s Fire, Emmanuel Music, the Boston Museum Trio, Les Violons du Roy, and El Mundo, among others. He has toured with the Mark Morris Dance Group and Natalie Merchant, and has appeared in recital with Dawn Upshaw, Eliot Fisk, Gil Kalish, and Kim Kashakashian. His playing has been praised as “plangent” by the Boston Globe, and “electrifying” by the New York Times. He plays a rare cello made in Rome in 1704 by David Tecchler. Founded in Boston in 1815, the Handel and Haydn Society is internationally acclaimed for its performances and recordings of Baroque and Classical music. Under the leadership of Artistic Director Harry Christophers, H+H’s Period Instrument Orchestra and Chorus delight more than 50,000 listeners each year at Symphony Hall and other leading venues in Boston.