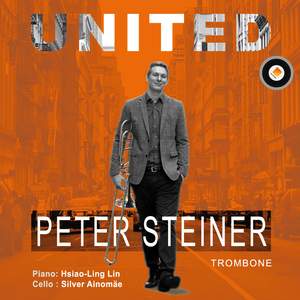 A young trombonist sets out from the mountains of South Tyrol (Italy) to the USA. He wants to learn the American way of brass playing at the Juilliard School in New York. This leads him to play as Principal Trombonist in the Colorado Symphony in their 2014-15 season.

After four years in the United States he returns to Europe to play as trombonist of the Vienna State Opera and Vienna Philharmonic in their 2016-17 season. He unites a European soul with an American spirit and introduces that in his debut album 'United' released on the Hello Stage label.

The album includes new works by Todd Goodman and Ricardo Mollá Albero as well as trombone standards such as Jacques Castérède's Sonatine and Eugène Bozza's Hommage a Bach. Fascinating are the arrangements of well-known pieces on the album. Peter Steiner starts with a strong statement playing Claude Debussy's Syrinx originally written for flute. Other arrangements include an aria from the opera Tosca by Giacomo Puccini as well as two arrangements of Astor Piazzolla pieces.

The Hello Stage label is the new label of the largest classical music community online, www.hellostage.com. It offers its best artist the opportunity to record music important to them.