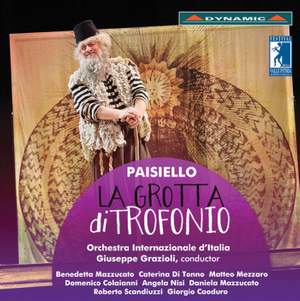 The music falls easily on the ear. The first part of Eufelia’s ‘In udir que-cari accenti’, a gentle Andante, includes attractive writing for oboe and bassoon…Grazioli conducts a lively performance... — Gramophone Magazine, May 2017 More…

This production of Giovanni Paisiello's La grotta di Trofonio marks the bicentenary of the composer's death. First performed in 1785, the opera buffa was a resounding and enduring success. The cave of the philosopher-sorcerer Trofonio was well-known in ancient Greece. Those who were granted permission to question the oracle were given two types of water to drink: the first made one forget all one’s worries; the other made one remember what had been witnessed in the cave. In this opera's libretto, the characters of those who go into the cave are transformed. This throws the lives of two young sisters into confusion, when their lovers accidentally enter the cave and emerge radically changed. This production is in the hands of a cast of specialists in this repertoire, including Domenico Colaianni, Daniela Mazzucato and Giorgio Caoduro.

The music falls easily on the ear. The first part of Eufelia’s ‘In udir que-cari accenti’, a gentle Andante, includes attractive writing for oboe and bassoon…Grazioli conducts a lively performance that was probably good fun in the theatre. The veteran Daniela Mazzucato is a characterful Madama Bartolina; Roberto Scandiuzzi booms impressively as Trofonio. Of the less well-known singers, Caterina Di Tonno stands out as a bright-toned Rubinetta