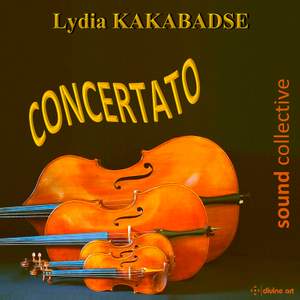 Superb performances of delightful music – one to hear again and again. — MusicWeb International, 8th May 2017

IV. A Landscape so Desolate

V. Straying into the Unknown

III. Dance of the Clockwork Toys

British composer Lydia Kakabadse (with roots in Greece, Austria, Russia and Georgia) reflects her cultural heritage in music that has western and mid-Asian elements – while this is strongest in her choral music, it is heard to good effect in her chamber works, which are often written in modal intonation ; her first chamber CD was issued by Naxos to good reviews and this set concentrates on the ‘alternative’ string quartet line - up with double bass, with one piece for cello and bass duo and one for mezzo-soprano and quartet.

The title ‘Concertato’ derives from the usage in baroque music meaning a rivalry or contrast between the instruments; the composer uses this to emphasis lines and dialogues between instruments, especially so in the cello/bass duo which gives the CD its name.

Sound collective is a group of distinguished music ians which works closely with composers, writers and educators in order to build new ways of appreciating and promoting chamber music.

Superb performances of delightful music – one to hear again and again.