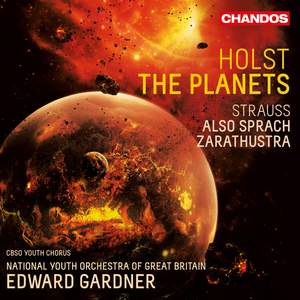 Here these showpieces are played with all the zest and freshness one may hope for from these highly skilled young musicians...It perhaps does not require a conductor of Edward Gardner's calibre... — BBC Music Magazine, April 2017, 4 out of 5 stars More…

For its very first album on Chandos, the National Youth Orchestra of Great Britain devotes its characteristic energy and musical mastery to an explosive programme that transcends daily life and earthly experience. It is helped by the enthusiastic, encouraging, and experienced baton of Edward Gardner as well as by the sumptuous yet detailed acoustic of Symphony Hall, Birmingham, all fully revealed in this surround-sound recording.

Their performance of Strauss’s Also sprach Zarathustra and Holst’s The Planets is already a point of reference in the UK after the immensely successful Prom concert that preceded the recording. The concert’s five-star review in The Daily Telegraph praised in particular the orchestra’s ‘great attack and complete absence of anything routine’, while The Guardian emphasised the great performance of the orchestra in this ‘graceful and evocative programme’, especially the ‘depth and richness of sound that belied their youth’.

This unique album is a first milestone in what promises to be a superb discography for the NYO.

Special notice: this album will also be released on Vinyl.

Here these showpieces are played with all the zest and freshness one may hope for from these highly skilled young musicians...It perhaps does not require a conductor of Edward Gardner's calibre to inspire such lively performances...But credit is surely due to him for the sensitivity shown in even such restrained movements as 'Venus'.

occasionally one misses the refinement of a professional outfit, but rarely: more often one is struck by the warmth and intensity of the string sound and the quality of the wind solos. Edward Gardner’s driven, finely balanced conducting ensures this is one for collectors as well as supporters.

Gardner’s conducting of Strauss’s Nietzsche-inspired symphonic poem is impressively flowing and direct while still being flexible and also alive to small details; in return the members of the National Youth Orchestra play with confidence, poise and bravura, and a lack of indulgence on Gardner’s part is refreshing to the music as a whole...However, it’s The Planets that takes the bouquets.