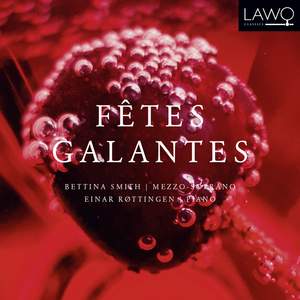 It is a well-known and undisputed fact that Gabriel Fauré (1845-1924) played an important part in the development of the French art song in the transition between the nineteenth and twentieth centuries. Less well known is that Claude Debussy (1862-1918) too gave vital impulses to French vocal music, a fact that has long been overshadowed by his impressionist instrumental works. The French language at the time, which was heavily influenced by the symbolist movement in art and literature, became the very path to modern French vocal music, taking up not only the legacy of Gounod and the French mélodie, but refining and developing it in accordance with the ideals of the time: spirituality and sensuality, clarity and elegance.

Fêtes galantes was originally a name for the French aristocracy’s intimate garden parties and comedy plays, which with the paintings of Antoine Watteau (1684-1721) became an independent genre in French art, and which was subsequently taken up by Paul Verlaine in his eponymous collection of poetry from 1869. Debussy’s “Fêtes galantes” might thus be seen as a fitting motto for Fauré and Debussy’s contribution to the French art song. These songs were originally written for the salons of the fin-de-siècle bourgeoisie, where aristocratic social conventions of the ancien regime went hand-in-hand with Baudelaire’s modernist ideas to create a distinctive air of decadence.