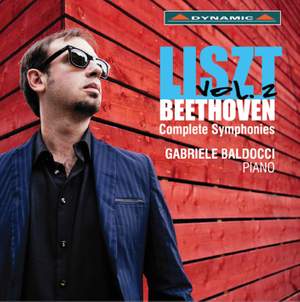 Excellent performances and an interpretation for long-term listening…the Finale is one of those fascinating Beethoven creations, a tremendous statement… Baldocci once again has the measure of... — MusicWeb International, May 2017 More…

Liszt’s vast output includes a large number of piano transcriptions of pieces that range from Bach organ works to extracts of Wagner, as well as virtuoso fantasias and ‘paraphrases’ of operas by numerous composers, including Mozart, Verdi and Gounod. Liszt freely re-imagined the original works in order to produce dazzling performances. But his piano transcriptions of Beethoven’s nine symphonies are entirely different. These accounts are profoundly faithful to the score, prepared with minute attention to matters of instrumental timbre on the one hand, and suitably pianistic translations of orchestral textures and techniques on the other.

This is the second volume of the complete Liszt piano transcriptions of Beethoven’s nine symphonies, released on five separate CDs. The first (CDS731), featured Symphonies Nos 1 and 6. This new release features Symphony No. 3 (Eroica), and the 6 Bagatelles Op. 126.

Gabriele Baldocci is a brilliant young pianist and rising star; he is held in high regard by Martha Argerich, with whom he often appears in concert.

Excellent performances and an interpretation for long-term listening…the Finale is one of those fascinating Beethoven creations, a tremendous statement… Baldocci once again has the measure of this as a feat of architecture, never allowing things to become baggy or over-inflated and keeping us immersed in the narrative…