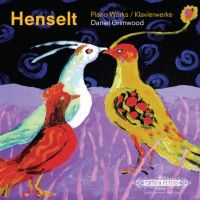 Daniel Grimwood’s rather magnificent recording opens with a roller-coaster razzle-dazzle of the ‘Concert variations’ on a theme from Donizetti’s L’elisir d’amore. Anyone who loves Liszt and Godowsky... — BBC Music Magazine, March 2017, 5 out of 5 stars More…

Daniel Grimwood shines a light on the music of Adolph von Henselt, one of the most admired Romantic composers and piano virtuosi of the 19th century, whom Schumann called the ‘hero of the pianoforte’, whose works have nevertheless been largely forgotten in the last 100 years. The album presents a rare collection of pieces, recorded in Schwabach in Germany, Henselt’s town of birth.

Daniel Grimwood’s rather magnificent recording opens with a roller-coaster razzle-dazzle of the ‘Concert variations’ on a theme from Donizetti’s L’elisir d’amore. Anyone who loves Liszt and Godowsky is in for a treat…besides the technical excellence, it is the atmosphere he creates that set this disc apart, bringing a touch of real class to music that deserves, yet rarely receives, such loving attention

Grimwood is a longtime champion of the composer and has had most of this music in his fingers for some time – and it shows…he is superbly fleet and fluent...there is plenty to enjoy on this well-recorded, handsomely presented disc

Like that of so many late-Romantic virtuosos, the reputation of this once lionised pianist-composer has faded to near oblivion. To the rescue rides Grimwood, who applies his beautifully coloured and voiced playing to these unexpected gems.