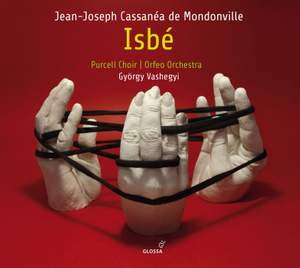 although the story is slight and formulaic, the music is anything but, with bold orchestration, eclectic language, novel forms and intensified emotions. Vashegyi directs his Hungarian forces... — Sunday Times, 22nd January 2017 More…

With 'Isbé', a pastorale héroïque by de Mondonville, György Vashegyi revives another overlooked dramatic work from the French Baroque – much as he did with Rameau’s 'Les Fêtes de Polymnie' also on the Glossa label. In his native Budapest, Vashegyi has been developing his interpretations of Baroque music with his Orfeo Orchestra and Purcell Choir for nearly three decades now, and for this recording he has assembled a magnificent team of vocal soloists, well-versed in the idiom of 18th-century French opera. Thomas Dolié assumes the important role of Adamas, the Chief Druid, who is besotted by Isbé, and yet is also provided with modern Enlightenment thinking (the opera was premièred in 1742). The title role is taken by British soprano Katherine Watson, while Isbé’s other suitor, Coridon, is sung by tenor Reinoud Van Mechelen.

Despite being somewhat over-shadowed in his lifetime by his older and more prolific contemporary, Jean-Philippe Rameau, Mondonville was already a successful composer of instrumental music and some ambitious grands motets before he composed 'Isbé', and his operatic vision was remarkably well-advanced in terms of structure, orchestration and melodic invention; he was clearly also aware of the advances made by Antonio Vivaldi in orchestral music.

A new recording of music by Mondonville – and György Vashegyi and his team have also been responsible for a disc of grands motets – is a welcome development in the modern re-evaluation of this impressive composer from the Languedoc.

although the story is slight and formulaic, the music is anything but, with bold orchestration, eclectic language, novel forms and intensified emotions. Vashegyi directs his Hungarian forces in a lively, touching reading, and Watson and Van Mechelen excel in the lead roles.

Throughout, the orchestration, at times translucent, is full of unexpected touches that surprise and enchant…the performance is outstanding in nearly every respect. Gyorgy Vashegyi once again displays a thoroughly idiomatic approach…Katherine Watson’s Ibse is an unqualified joy…[Reinhoud Van Mechelen] brings tender ardour and impassioned restraint to his role, singing with an easy elegance…Isbé is not only an exceptionally rewarding opera, but also one that adds to our understanding of French Baroque Music.