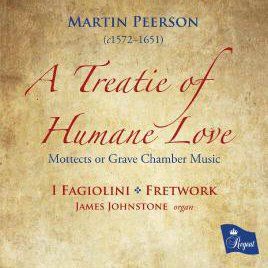 Following on from Fretwork’s acclaimed release on Regent of Sublime Discourses (REGCD341), which featured the complete instrumental music of John Milton and Martin Peerson, I Fagiolini and Fretwork come together with organist James Johnstone for the première recording of Peerson’s A Treatie of Humane Love.

Newly edited by Richard Rastall, this collection of song settings of poetry by Sir Fulke Greville, focusses predominantly on the subject of love, making it an ideal counterpoint to St Valentine’s Day.

Martin Peerson (c1572–1651) has been known since the mid-20th century as an engaging and very performable composer with a highly individual voice; but in his own time he was much respected and published, perhaps the most able of those composers who were not in royal service.

This release is a major contribution to the discography of 17th century English music in incomparable performances from some of the world’s finest artists in the field.

Fretwork’s musical mastery and I Fagiolini’s trademark incandescent sound are perfectly married in this repertoire…[the directors carry] the music from profundity to gentle humour, spotlighting varied textures and accents within these often-characterful vignettes…from the subtle colours of James Johnstone’s continuo tapestry to sumptuous low vocal notes, the clarity of recording is exceptional

This sacred chamber music, mini sermons set for voices and viols, is persuasively presented by I Fagiolini and Fretwork, past masters at this kind of thing, with exquisitely detailed word-painting, authentic pronunciation, characterful delivery, and phrasing of the greatest delicacy – what a find!