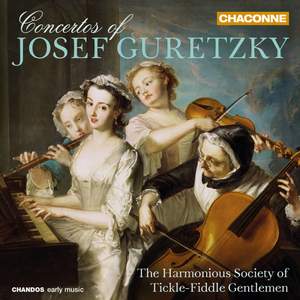 The Harmonious Society of Tickle-Fiddle Gentlemen

These performances of his concertos are every bit as frisky and fun as the music itself. — BBC Music Magazine, March 2017, 4 out of 5 stars More…

Černohorský: Fugue in A minor

The Harmonious Society of Tickle-Fiddle Gentlemen takes its name from the original ensemble that gave London's first public concerts, from 1678, and which continued to meet well into the middle of the eighteenth century. The members of the group are leading figures on the period instrument scene in the UK and Europe, offering programmes that draw on recent and original research. They have been described on BBC Radio 3 as 'purveyors of exhilarating and uplifting music'. The baroque ensemble here commits to record unjustly neglected concertos by Josef Guretzky, rich in Italian-influenced virtuosity and dynamism, yet highly innovative in the contrast of rhythms and forms. The album features the premiere recording of four of Guretzky’s nine cello concertos as well as Guretzky’s only surviving Violin Concerto. They are complemented by a contemporaneous keyboard fugue by another Czech master of the baroque era, Bohuslav Matěj Černohorský.

These performances of his concertos are every bit as frisky and fun as the music itself.

This music certainly brings out good things in the Tickle-Fiddlers, who fully justify their name. There is real joy in the music-making. The ensemble-playing, under the artistic direction of Robert Rawson, is crisp and buoyant [and the soloists] wear their virtuosity lightly

These are lithe, athletic performances…the euphoniously named Harmonious Society of Tickle-Fiddle Gentlemen (apparently from a description of the musicians who gave London’s first public concerts) play one-to-a-part and clearly have fun…Robert Rawson’s booklet note is exemplary.