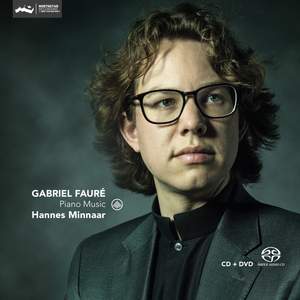 Minaaar’s identification with this unique realm of music is complete and his deeply felt interpretations shine with clarity and infinite nuance — Gramophone Magazine, February 2017

No. 2 in C-Sharp Minor. Allegro

No. 4 in F Major .Allegretto moderato

No. 6 in E-Flat Minor. Andante

No. 7 in A Major. Andante moderato

Hannes Minnaar is among the very best pianists of the new generation and this Fauré disc presents a selection of pieces where his “style characterized as sensitively romantic, musically inventive, with much tonal beauty and fluent precision” (HRAudio) can be fully displayed.

Thirteen nocturnes and as many barcarolles form the core of the collected output for the piano by Gabriel Fauré (1845-1924). Night-time meditations, then, along with inspiration drawn from rippling water (the origins of the barcarolle lie in the songs sung by Venetian gondoliers). Together with some impromptus, preludes and other works, one might rapidly gain the impression of a delightful collection of salon pieces, whose titles display the influence of Chopin. But this music is so very much more than pretty salon music. In the intimacy of these genres, Fauré succeeded time and again in nothing short of exposing his very soul. And the French composer’s style is entirely his own - original and personal - from first note to last.

This disc centres on the Theme and Variations, Op.73 and Nine Preludes, Op.103, surrounded by several nocturnes, barcarolles and other pieces. And the set includes also a bonus DVD of the same Fauré pieces in concert.

Along with violinist Isabelle van Keulen, Minaar has recorded a complete edition of Beethoven's Sonatas for piano and violin (CC72650) and he has already issued two volumes of Beethoven's Piano Concertos complete survey with Jan Willem de Vriend conducting The Netherlands Symphony Orchestra (CC72672, CC72712). In October 2016 Hannes Minnaar was awarded the most prestigious musical prize from the Dutch Government, De Nederlandse Muziekprijs.

Repertoire is the same as on the SACD