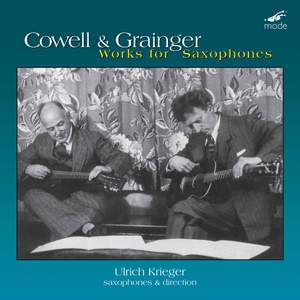 Grainger: The Immovable Do "The Ciphering C" (Version for Saxophone Ensemble)

The Immovable Do "Ciphering C" (Version for Saxophone Ensemble)

Grainger: The Lonely Desert-Man Sees the Tents of the Happy Tribes (arr. U. Krieger for saxophone and orchestra)

Grainger: The Merry King (arr. U. Krieger for saxophone ensemble and piano)

Molly on the Shore (Arr. for alto Saxophone & Piano)

Grainger: The Lonely Desert-Man Sees the Tents of the Happy Tribes

Percy Grainger (Australian-American) and Henry Cowell (American) were forward-looking, pioneering composers and close friends. These two men had so much in common, musically and personally, that it is almost as if they were mirror images of one another. Besides having classical training and folk music influences, both were also musical avant-gardists. They experimented with new sounds, new forms of expression, and new notational systems. Most of their saxophone pieces are either folk arrangements or original compositions inspired by British and Celtic folk music. Cowell and Grainger created a rich repertoire for the classical saxophone, but much of it is overlooked, only partially published, and therefore widely unknown until the release of this CD.