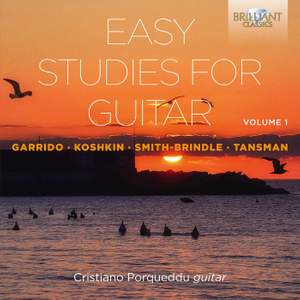 No. 1. The Harmony of Peace

The growing library of guitar music on Brilliant Classics already encompasses several albums of etudes and miniatures written for students and amateur players. From rare to well-known, there are the studies of Gangi (BC95204), Tansman (BC95221), Castelnuovo-Tedesco (BC95219) and Gilardino (BC9285), among many others.

The Gilardino album features the artistry of guitarist and composer Cristiano Porqueddu, who has made several other well-received albums for Brilliant Classics, including collections of rarely encountered composers in ‘Novecento Guitar Preludes’ (BC9292) and ‘Novecento Guitar Sonatas’ (BC9455), both of which include many first recordings. Reviewing the set of Preludes, MusicWeb International praised the ‘coruscating variety, fine recorded sound and lovingly shaped playing… Porqueddu’s playing is miraculously clean and there’s very little fret noise.’

Porqueddu’s appetite for the unusual and sense of adventure is further confirmed by a new set of ‘Easy Studies for Guitar’, containing music that is as satisfying to listen to as it is relatively unchallenging to master for the intermediate-to-advanced student guitarist. Only Tansman has a currency outside guitarists, but the other three, more contemporary figures speak with powerfully individual voices.

The Russian composer-guitarist Nikita Koshkin may be a particularly welcome discovery for non-initiates: born in 1956, he counts the music of Shostakovich and Prokofiev as important early influences, but his own music lies within the Spanish guitar tradition, while employing more modern harmonies and building to climaxes of unexpected tension and drama. Born in Granada in 1975, Eduardo Garrido now teaches and composes in Mexico, and in his studies can also be heard a non-native wildness and urgency, for all that they are sympathetically composed with intermediate students in mind.

Master guitarist Cristiano Porqueddu embarks on a praiseworthy and ambitious recording project: Easy Studies for Guitar, works written by famous or less well known composers with the special aim to educate, challenge, develop and entertain the aspiring guitar student. The works focus on certain technical issues disguised as it were in the musical content and its emotions.

Cristiano Porqueddu, who already recorded more than 40 CD’s, all of them to great critical acclaim, takes his task seriously, always finding the right atmosphere and character of these delightful musical gems, aided by his immaculate technique.