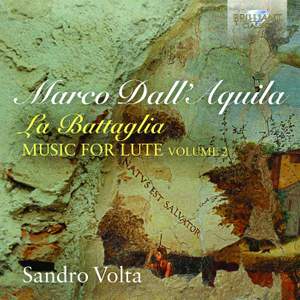 Aquila: Bernardo non puol stare a due liuti No. 40-40A

The late 15th century saw several significant changes in the lute’s morphology: the move from 5‐course to 6‐course instruments coincided with more extensive polyphonic writing and led to a gradual abandonment of the plectrum for plucking the strings, in favour of the fingers which are more suitable for polyphony.

In this period of rapid musical development the Ricercar became the most important musical form, alongside with the dance music and “paraphrases” of liturgical and secular vocal music. Marco Dall’Aquila became one of the most prominent lute players and composers in this period.

The originality of Marco’s writing, which is always idiomatic in the way it explores the lute’s full range of sounds and expressive potential, is balanced between the 15th century mastery of improvisation and the new trend towards polyphony inspired by vocal music. Master lutenist Sandro Volta recorded already works by Dall’Aquila for Brilliant Classics (BC94805), to great critical acclaim: “the performances of these technically challenging works by Sandro Volta are immaculate” (Musicweb).