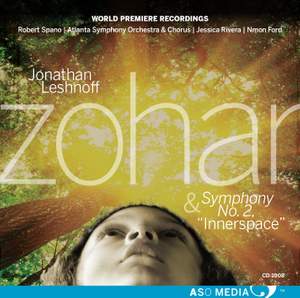 "Music is one of the lower parts of the upper worlds and the upper part of this lower world" + For Jonathan Leshnoff, the unique essence of music resides in it's ability to transcend our physical limitations, and transport us to places that would otherwise be impossible to go. Leshnoff asks: What happens during a concert? People purchase a ticket for their place in the concert hall. They sit in the hall, the lights are turned down, and they listen to the musicians. The concert ticket does not entitle the bearer to some tangible physical entity he can carry with him from the hall. Instead, we attend musical concerts to openourselves to a language that transcends space and time, that takes us inside ourselves, that encourages and challenges us. + It is for this reason that Jonathan Leshnoff contends that his goal is to take the listener "on a journey. And if I haven't done that, I haven't done my job." + Given Leshnoff's religious faith and believe about the unique importance and function of music, it's little surprise that Jewish mysticism has played such a profound influence upon his recent compositions. The authentic Jewish mystical schools outline in great length the spiritual architecture of the universe and it's interaction with the G-d and mankind. + It is within those systems that Leshnoff draws his inspiration. Indeed, Leshnoff is in the midst of engaging on a ten-piece multi-year meta-project that parallels the fundamental building blocks of Jewish spiritual thought. The two works on this recording are part of that meta-project.