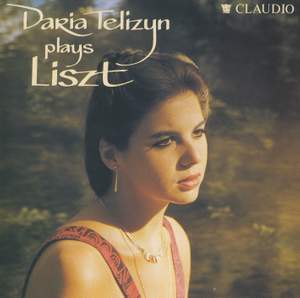 "If I had heard only Liszt's notorious grand Sonata in B minor, I would have been convinced that I had heard one of the greatest pianists." Such is the effect Daria Telizyn's October 1986 concert at Amsterdam's Concertgebouw had on the Dutch critic Jan van Voorthuysen. And the Liszt Sonata that caused him to compare her with Horowitz is the centrepiece of this, her debut recording. In the recent past Daria Telizyn has also performed, among other places, in France, Germany, North America, Belgium, and in London at the Purcell Room and Saint John's Smith Square. It was in the latter's magnificent church-turned-concert hall, with its marvellous acoustics, that the recording was made. Daria Telizyn's performances in Washington D.C., where she now lives and teaches (at the Levine School of Music) have won her critical acclaim. Thus, The Washington Post's Kate Rivers wrote: "Telizyn immediately displayed deep musicality and sensitive phrasing and construction. She produced a strong, beautiful sound from deep within the keys." A few months later Vincent Patterson, another Post critic, wrote: "The young Canadian's virtue of delicious sensitivity showed in Morawetz's Fantasy, Elegy and Toccata. Two concert etudes by Franz Liszt unleashed Telizyn's wilder temperament and technique." She has also played for the Voice of America, Dutch radio, CBC, and WETA and WGMS, Washington's leading classical music stations. Ukrainian Canadian pianist Daria Telizyn was born on 31st March 1960 in Toronto and sadly died in Florida on 21st March 2004 at the age of 44.