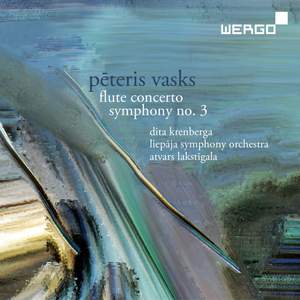 In his early works Vasks was influenced by Bartók, Shostakovich, and the 'New Polish School', he was inspired after 1990 by the minimalism coming out of Estonia.

This Baltic-Finnish stylistic atmosphere is present in Vasks’s Third Symphony (2004-05), a commission from the Tampere Filharmonia. The orchestra’s management asked the composer for an 'introductory piece' of 15 to 20 minutes duration. His trust in the unique energy of his own inner voices gave birth to a symphonic landscape of more than 40 minutes duration, his longest and most intellectually rich orchestral work so far.

In his symphony, Vasks wanted to represent the beauty of the world God created, the destiny of humanity, and the fate of the Latvian people, as he explained. The symphony speaks 'of love and fidelity to basic principles, of loss, and of the strength to rise and move forward – and also of the endless battle between darkness and light'.

Like its predecessors, the Third Symphony is quite transparent. There are seldom more than two simultaneous sound events at any given moment, one of which is usually a static background. There is little contrapuntal activity.

Melodic gestures, atmosphere, and instrumental colour establish the work’s character. His Concerto for Flute and Orchestra is constructed symmetrically. The burlesque middle movement is framed by elegiac outer movements flowing along in serene tranquility and beauty. Passages with wind chorales and distant ringing of bells alternate with passages the mood of which ranges from meditative via lamenting to euphoric.