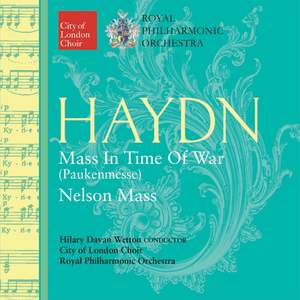 New recording of two great, late choral works by Haydn – written in a turbulent time when Austria was under attack, facing imminent invasion. Nelson Mass (‘Mass In Time Of Fear’) is Haydn’s most dramatic and exciting mass. Mass In Time Of War (‘Paukenmesse’) echoes this unrest with its famous prominent timpani part, yet the music concludes on a note of triumphant optimism.

Hilary Davan Wetton is one of the UK’s most experienced choral conductors, with a long association with the City of London Choir. City of London Choir has earned an enviable reputation for its distinctive youthful sound and the quality of its performances.

Distinguished by fine orchestral playing and some good soloists