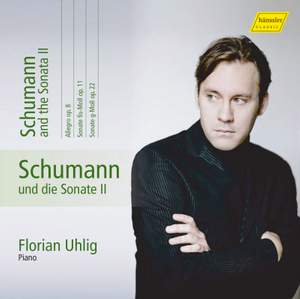 Schumann: Allegro in B minor, Op. 8

I. So rasch wir moglich

Florian Uhlig on this album takes on one of the most difficult tasks of all piano music: Robert Schumann's second piano sonata. With its provocative, completely paradoxical tempo specifications and its enormous technical demands, this sonata has driven generations of pianists into the cloister: how on earth is this supposedly such a complex but at the same time emotionally charged work? Florian Uhlig shows how it works. Everything sounds very natural, fluid. Technical issues seem to play a very minor role. Instead, Uhlig prefers to take care of the work context. The recording is particularly interesting due to the inclusion of Schumann's rejected original finale and an Allegro (Op.8), which is closely related to Schumann's first Sonata Op. 11, which can also be admired on this album. And this again shows Uhlig's claim to present the most complete recording of the Schumann piano oeuvre so far, but fortunately not the most complex one. It is very pleasant that someone cares more about real music than superficial effect!