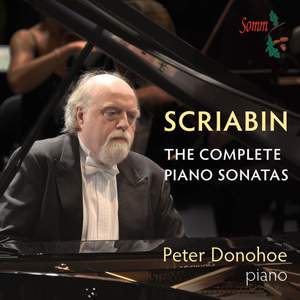 This month’s SOMM release will no doubt be a special treat for the many fans of Peter Donohoe’s recordings: a two-CD slimline set of Scriabin’s Ten Piano Sonatas, ending with Vers la Flamme Op. 72, one of his last pieces for piano, written in 1914.

Russia produced three renowned composer-pianists at the end of the nineteenth century: Medtner, Rachmaninov, and his fellow student at the Moscow Conservatoire, Alexander Scriabin, a unique figure in Russian music as he seemed to follow a musical path all his own, completely different to that of either of his contemporaries. He created an original, exotic soundworld which progressed from Chopinesque romanticism in the First Sonata to a world of fantasy, inhabited by uncompromising, audacious dissonances in the later Sonatas which make overwhelming demands on any performer who dares to tackle them.

In his third Sonata Scriabin provided descriptions of the four movements under the heading ‘States of the Soul’. In the Fourth he experimented with Wagner’s Tristan harmonies. By the Sixth Sonata Scriabin’s harmonic tonality had completely broken down and dissipated – “frightening…dark and mysterious, impure, dangerous” as he himself wrote. The Seventh Sonata (White Mass) instructs the performer to play ‘with a heavenly voluptuousness’, ‘with a dark majesty’… Through the music he wanted to express an ecstatic disorder creating a trance-like effect on performer and audience. The Ninth (Black Mass) represents the Satanic but the Tenth has an opening marked ‘very sweetly and pure’. He said of this, ‘My Tenth Sonata is a sonata of insects. Insects are born from the sun, they are the kisses of the sun.’

The single-movement No 5, with its magnesium flare of a beginning, is even the high point, for the remarkable yearning ecstasies of the later run, all too readily turning into trills, remain in productive tension with a firm architecture.

Donohoe is a masterly guide, his playing both unearthly and earthy. With his visionary notions of creation and the cosmos, Scriabin can feel like too much of a good thing. Donohoe reins him in just enough, and makes a powerful case.

There are fine sets available of the ten piano sonatas of Alexander Scriabin , but none better than this. This is a most distinguished issue

This rich, varied and often illuminating survey of the 10 piano sonatas…bears all the marks of the evangelicalism of the newly converted…all of the pieces benefit from an intelligent interrogation that encompasses the conventional and the idiosyncratic with an eloquence that binds both seamlessly together. Demanding but rewarding.