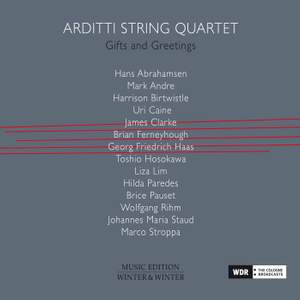 All works are world premeire recordings

The Arditti String Quartet celebrates their 40 years on stage. It is astounding to see how many great composers of our time have written for the unique sound virtuoso Irvine Arditti and his quartet. In co- operation with Westdeutscher Rundfunk Winter & Winter releases a special album with 13 first recordings, compositions which were written for the birthday of this quartet. A top-class birthday song! The WDR studio production, done immediately after the world premieres at Wittener Tage for new chamber music, unites the major contemporary composers of our time. The Arditti String Quartet plays with the guest artists Uri Caine on piano and Brice Pauset on harpsichord pieces by Mark Andre, Hans Abrahamsen, Harrison Birtwistle, Uri Caine, Brian Ferneyhough, Toshio Hosokawa, György Kurtág, liza lim, Hilda Paredes, Brice Pauset, Wolfgang Rihm, Marco Stroppa and Jennifer Walshe. An album brimming with first recordings, sound gifts, serenades, dedications, greetings, homages, an album titled “Gifts and Greetings”. Arditti – that’s the ensemble for which critics have run out of the superlative: The fabulous four!