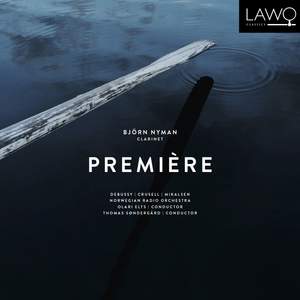 It is a rare occasion indeed when an album of clarinet concertos is released in Norway, but Finnish clarinettist Björn Nyman’s debut CD as soloist — “Première” — features three of them. Nyman, one of the world’s leading performers on his instrument and long-time solo clarinettist of the Norwegian Radio Orchestra (KORK), presents together with the orchestra three works stylistically very broad in scope — music reflecting the extremely versatile musician that he is.

The earliest work is by a countryman of Nyman, Bernhard Crusell, one of the first important Nordic composers. The Clarinet Concerto in F Minor was the work Crusell held in the highest regard.

“Première Rhapsodie” by Claude Debussy presents other challenges. It is a virtuosic standard work for all clarinettists for whom the sound is the alpha and omega.

The real test, and an event in itself, is the first-ever recording of Jan Erik Mikalsen’s clarinet concerto. He is regarded as one of our leading composers, and in 2015 his work “Songr” won the prestigious contemporary music prize awarded by the International Rostrum of Composers. The clarinet concerto is sumptuous music that allows both orchestra and soloist to unfold their full opulence of sound.