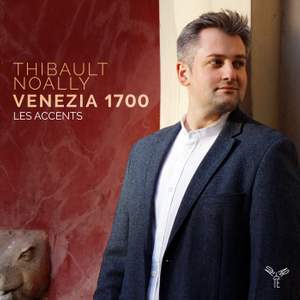 Claire Sottovia makes an admirable foil to Thibaud Noally, and the continuo players are splendid. But the disc really belongs to Noally, who exhibits expert double-stopping and elegant phrasing.... — Gramophone Magazine, January 2017 More…

Thibault Noally and Les Accents present a celebration of the Venetian Sonata. The term sonata was first coined at the end of the 16th century by Giovanni Croce and Andrea Gabrieli but it was Tartini, born and active in the Venetian Republic, who created some 200 sonatas for violin, the largest body of work in the form, followed by Vivaldi with 80. If Vivaldi borrowed from all an sundry [Caldara, Corelli, Matteis, Bonporti, Albinoni] then others were quick to borrow from him too and the Venetian sonata spread through competing musicians to Germany, via Pisendel and the Dresden court; France with Leclair and Guignone; and Russia with the Venetians Madonis and Dall'Oglio. Thibault Noally is a recognised name on the international baroque stage. He best-known as the solo violin of Les Musiciens du Louvre-Grenoble with Marc Minkowski, with the Concerto Köln, Pulcinella or the Ensemble Matheus.

Claire Sottovia makes an admirable foil to Thibaud Noally, and the continuo players are splendid. But the disc really belongs to Noally, who exhibits expert double-stopping and elegant phrasing. His virtuoso account of the Presto in Albinoni’s sonata will take your breath away…a first-rate disc

From the first shimmering arpeggios across the strings...it is clear that this is something special: a highly characterised, sharply imagined feast of baroque violin playing. Thibault Noally’s command of this improvisational style...is complete.

beautifully played … the kind of thing you should play to anyone who thinks all Vivaldi sounds the same … they [Thibault Noally and Les Accents] play beautifully here, and what they offer us is a snapshot of the Venetian violin sonata at the start of the 18th century, virtuosic vehicles written after Corelli’s revolution