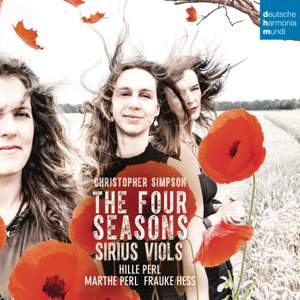 [Sirius Viols] balance eloquence and virtuosity here in a finely-judged equilibrium. Their sound is pellucid, ensemble and articulation flawless. The inventive continuo realisations paint the... — BBC Music Magazine, May 2017, 5 out of 5 stars More…

Antonio Vivaldi’s The Four Seasons is one of the most popular works in the classical repertoire worldwide. But Vivaldi wasn’t the only composer to be inspired by the change of seasons. Another was Christopher Simpson (1605–1669), one of the best viola da gamba players of the early English Baroque and a highly esteemed composer. His Four Seasons is one of those fascinating works that take us on a musical journey through the recurring parts of the year. Now Hille Perl and her ensemble, Sirius Viols, have recorded this colourful piece, a work abounding in dynamism, virtuosity and experimental verve. They guide the listener on a musical tour of icy winter, burgeoning spring and sultry summer all the way to multi-coloured autumn.

[Sirius Viols] balance eloquence and virtuosity here in a finely-judged equilibrium. Their sound is pellucid, ensemble and articulation flawless. The inventive continuo realisations paint the seasons' variegated colours…[and] the whole makes for a subtle yet sensuous odyssey through the cycle of the year

there is no time in this recording when you feel they are just playing the notes and hoping something will come of them. Instead they give this long-limbed music a coursing ebb and flow that never flattens, and a sense of purely musical drama that holds the listener in thrall...Frankly, this beautiful disc is as inspiriting as a woodland walk in autumn.