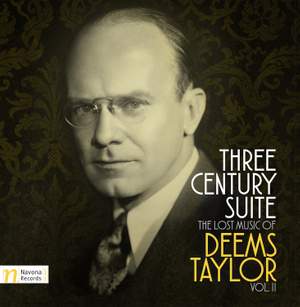 2016 marks the 50th anniversary of composer Deems Taylor’s death (1885-1966), an opportune time to revisit his music by releasing his previously unrecorded piece Three Century Suite. This piece, in the form of a Baroque dance suite, is delightfully accessible, full of beautiful melodies, exquisite harmonies, and marvelous orchestration. Three Century Suite was performed once before, in Interlochen, Michigan, in 1961, conducted by A. Clyde Roller. In the 1920s and 30s Taylor's compositions were met with great enthusiasm. His orchestral pieces were widely played. Paul Whiteman commissioned pieces by both Taylor and George Gershwin for his 1925 concert “Second Experiment in Modern Music”. That same year, the Metropolitan Opera commissioned him to write an opera – the first American to be so honored. Based on the success of the resulting The King’s Henchman (with libretto by Edna St. Vincent Millay), the Met commissioned a second opera, Peter Ibbetson. This was also a big success, and the number of performances for The King’s Henchman and Peter Ibbetson is greater than any opera of any other American composer. Taylor was also an influential music critic and commentator. He reached more people through his radio commentaries than any other music critic in American history, before or since, and became nationally known as “The Dean of American Music”. Noted conductor Gerard Schwartz, of the Seattle Symphony, says of Taylor as a radio commentator, “Single-handedly, he probably did more for classical music in the first half of the twentieth century than anyone else in the United States.” As a critic, Taylor was open to the experiments of modernism, and wrote favorably of Alban Berg, Stravinsky, Gershwin, and others. As a composer, his music remains consistently within the romantic and impressionistic style, and displays the influences of Wagner, Tchaikovsky, and Debussy. A promoter of classical music throughout his life, Taylor is possibly best-known today as the narrator of Walt Disney’s 1940 film classic Fantasia. It was he who suggested Stravinsky’s Rite of Spring for the dinosaur sequence. Taylor's style is fundamentally melodic and tonal, with rich, expressive orchestration. His music maintains interest through constant variation and frequent modulation. Above all, he views music as the “language of emotion” and taught that the test of good music was “how it sounds”. His belief in these standards partially explains the fact that after World War II, when these criteria were violently rejected by the generation of Boulez, Stockhausen, and Cage, Taylor’s music receded from the spot light. Now – fifty years after his death – it seems appropriate to renew our appreciation of this composer’s work, because Deems Taylor is, indeed, a master - of orchestration, form, contrast, balance, texture, not to mention melody and harmony – and Three Century Suite is one of his masterpieces. Key Points: • One of the best-known musical figures of the first half of the twentieth century, Deems Taylor was a composer, radio commentator, music critic, and author. His fame as a composer is illustrated by his appearance on the cover of Time Magazine in 1931. • Three Century Suite was composed in the late 1940’s and completed in its current form in 1950. This is the premier recording, based on a handwritten score which is located in the Deems Taylor archives at the Yale Music Library. • Taylor was a prominent radio commentator. As the voice of the New York Philharmonic, Taylor was known as “the man who brought classical music to the American people” and “The Dean of American Music”. • Taylor was the fourth President of ASCAP, and is probably best known today as the narrator of the original version of Disney’s classic film Fantasia. • 2016 marks the 50th anniversary of Taylor’s death.