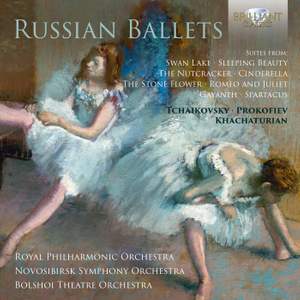 Act I The terrace in front of the palace of Prince Siegfried: No. 2. Valse

Act II By a Lake: No. 13. Dances of the swans: IV. Allegro moderato

Act III In the Castle of Prince Siegfried: A Ball at the Castle: No. 20. Hungarian Dance: Moderato assai - Allegro moderato - Vivace

Act III In the Castle of Prince Siegfried: A Ball at the Castle: No. 21. Spanish Dance: Allegro non troppo (Tempo di bolero)

VI. Cinderella Goes to the Ball

Prokofiev: Wedding Suite from The Tale of the Stone Flower, Op. 126

II. Dance of the fiancee's girl-friends

I. Montagues and Capulets

V. Romeo at Juliet's before Parting

VI. Dance of the Antilles Girls

VII. Romeo at the Grave of Juliet

Dance of the Rose Maidens

Dance of the Highlanders

Scene and Dance with Crotalums

Towards the end of the 19th century, ballet was declining in popularity in Western Europe but acquired an increased significance in Russia. This was thanks in part to the music for dancing which had been part of native operas ever since Glinka founded a school and tradition with Ruslan and Ludmila and A Life for the Tsar. However, it was also due to a succession of gifted French choreographer such as Marius Petipa that the St Petersburg ballet flowered.

Minkus, Delibes and Adam, among many others, were commissioned for scores by Petipa, but it was with Tchaikovsky that ballet music would alter radically, away from its incidental, accompanimental role and towards a symphonic status which is recognised by the ballets on this compilation being at least as famous for their music as their dancing. Petipa was responsible for commissioning the composer’s most familiar ballet – perhaps the best‐loved ballet of all, The Nutcracker, on which the composer exercised all his mastery of timing and orchestration. Although Serge Diaghilev was the great innovator in commissioning and choreographing music for dancing at the turn of the last century, his example was ignored in Russia under Soviet rule. The great state companies in Leningrad and Moscow continued the 19th century tradition of full‐evening ballets to which these examples by Prokofiev (Romeo and Juliet, Cinderella and the more rarely encountered Stone Flower) and Khachaturian (Spartacus and Gayaneh) belong. ‘Dancing,’ said the Danish choreographer August Bournonville, ‘is an expression of joy, a desire to respond to the rhythm of the music.’ That joy is amply illustrated by the suites from eight ballets in this compilation, which would make an invaluable introduction to the art‐form.