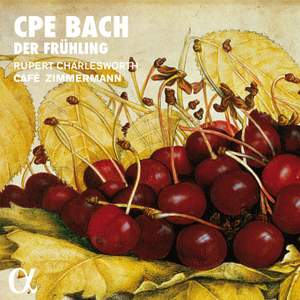 Carl Philipp Emanuel Bach is the most famous of the sons of J.S. Bach. His magisterial oeuvre contains, notably, a large number of concertos for various instruments and keyboard pieces. But the composer also excelled at vocal music, thus continuing in the family tradition by composing, among other genres, sacred and secular cantatas and songs. His works respect the rules of Baroque style while also hinting at the dawn of the Classical style subsequently represented by Haydn and Mozart.

Café Zimmermann has been including the music of C. P. E. Bach in its programmes for years, notably in a recording (ALPHA 107) that marked a turning point in the discography. A Leipzig newspaper wrote of the ensemble’s interpretation of works by Emanuel Bach: ‘Anyone who has heard the sensational Café Zimmermann in this music, the brilliant, ardent spirit of their playing, their profusion of colours . . . will want to hear more of this composer.’ Here is a further opportunity to do so, in partnership with the English tenor Rupert Charlesworth, who recorded his first album in 2015 (Nocturnes, ZZT 355).

Café Zimmerman’s playing is by turns dynamic, precise and beguiling…although Alpha’s recording is closely miked, Charlesworth’s vocal sureness between registers remind me of the youthful Christoph Prégardien – and there’s no higher praise in this repertory

it ranges fascinatingly from the bold and eccentric in the A minor Sinfonia, to the sweet and sentimental in the songs and arias...Excellent, tight-knit playing by the eponymous cafe players.