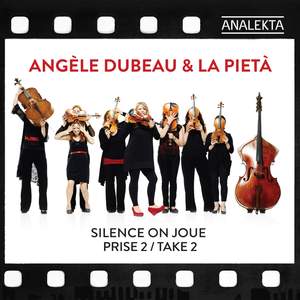 Horner: The Ludlows (from Legends of the Fall)

Nyman: The Promise (From "The Piano")

Glass, P: The French Lieutenant Dreams (From "The Screens")

Rachmaninov: Rhapsody on a Theme of Paganini (From "Somewhere in Time")

Umebayashi: Yumeji’s Theme (From "In the Mood for Love")

Oldfield: Tubular Bells (From "The Exorcist")

Klaus Badelt, Geoffrey Paul Zanelli, Hans Zimmer: He’s a Pirate (From "Pirates of the Caribbean - The Curse of the Black Pearl")

Djawadi: Winterfell (From "Game of Thrones")

Trevor James: The Kiss (From "The Last of the Mohicans")

Bock, J: If I were a rich man (from Fiddler on the Roof)

"2017 marks both the 40th year of my musical career and the 20th anniversary of La Pietà. This recording is also my 40th. With so many round and festive numbers, and after so many musical encounters with you, my beloved and loyal audience, I wanted to – I must – give something back.

So I thought I might simply accede to the many requests I get to record another album of movie music – and in fact go one better and do a double album. There is so much to choose from, but I found myself drawn to music that is at once beautiful, powerful, and evocative, even when removed from its original context. Some of these melodies are rather sweet; others are more savoury. But they all deserve a wider audience.

I personally researched this repertoire and selected a variety of film score excerpts with the notion of taking a fresh look at the original versions and adding a new dimension with my violin and the wonderful musicians of La Pietà." - Angèle Dubeau