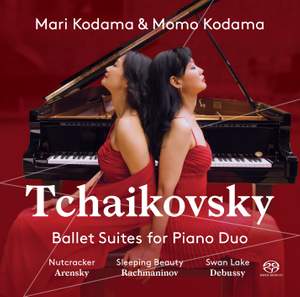 The Sugar Plum Fairy sounds as delicate on piano as for the celesta or the original orchestration, and the delicious Pas de deux loses nothing in translation...An enjoyable way to encounter these... — The Observer, 8th January 2017, 3 out of 5 stars More…

Together for the first time in the recording studio, the sisters Mari and Momo Kodama are on scintillating form in these lively arrangements of music from Tchaikovsky’s ballets Swan Lake, Sleeping Beauty and Nutcracker. In another first, the release contains the first ever recording of Arensky’s transcription of the timeless Nutcracker together with notable arrangements by Debussy and Rachmaninov.

“Tchaikovsky was really the first composer to combine a broad sweep of ballet music with a great story,” the Kodama sisters write in their introduction to the release, “before that, it more resembled a compilation of pieces…in all three works there is folkloric and popular music. He has the great skill to make such vivid colours and textures on a large canvas… This makes his orchestral works very special.” “Our challenge was to use just two pianos … to bring the same sense of scale,” they write, “with just two pianos the atmosphere is more intimate, it brings a different quality to the music. And the composers who made the transcriptions brought their own personality to bear on the works. So we tried to reflect that in our playing.”

The sisters Mari and Momo Kodama both pursue busy international careers. Momo specialises in French and Japanese composers and 20th century and contemporary composers; she has been widely praised for her ‘attractive, lyrical tone’ and ‘technical brilliance’. Mari has established an international reputation for profound musicality and articulate virtuosity; she has recorded extensively for PENATONE, including an acclaimed cycle of the complete Beethoven piano sonatas.

The Sugar Plum Fairy sounds as delicate on piano as for the celesta or the original orchestration, and the delicious Pas de deux loses nothing in translation...An enjoyable way to encounter these scores.