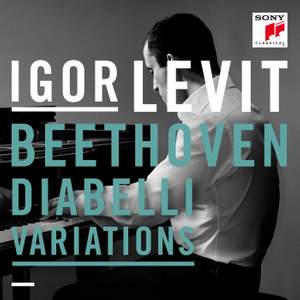 Levit's Diabelli Variations brim with exuberance, vitality and often humour, tumbling into one another with unstoppable energy but with such lightning-like shifts of character that the overall... — Katherine Cooper, Presto Classical, 16th October 2016 More…

Levit is particularly at ease with the piano works of Beethoven. He is currently performing a Beethoven cycle at the Wigmore Hall where he is performing all Beethoven’s 32 piano sonatas over 8 concerts. The Diabelli Variations form part of Beethoven’s later output and is recorded here by Levit; “Not since Andreas Staier’s version on fortepiano for Harmonia Mundi has there been such a riveting dissection of Beethoven’s amused quirkiness” (BBC Music Magazine).

Levit's Diabelli Variations brim with exuberance, vitality and often humour, tumbling into one another with unstoppable energy but with such lightning-like shifts of character that the overall experience is exhilarating and exhausting.

[A] sense of freshness and discovery runs through his Diabelli Variations...one of the most impressive aspects of the performance as a whole is how Levit holds the different aspects of this massive work in balance.

He characterises [the Diabellis] with rambunctious glee, brilliantly incisive and as nimble as a cat on a high wire, while keeping the music’s overall arch in sight...One imagines Beethoven playing it like this — in his dreams, anyway.