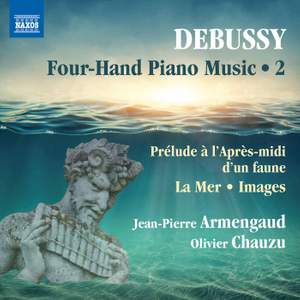 In 1891 the Symbolist poet Stéphane Mallarmé asked Debussy to compose incidental music for a theatrical version of his poem L’Après-midi d’un faune (The afternoon of the faun) and the resulting work, with its innovative melodic, harmonic, and rhythmic writing, is both impassioned and expressive. The four-hand arrangement was made by Ravel in 1910. Inspired by the natural phenomena of water, light and wind and, according to Mme Debussy, unplayable in its piano four-hand version, La Mer is a masterpiece of some structural complexity. Of the technically inventive Images, which evoke Spanish sights, sounds and fragrances, Debussy wrote that the work marked a departure for him, dealing with “realities” not impressionism.