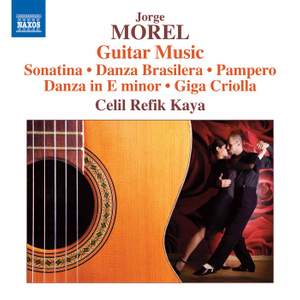 Argentinian guitarist and composer Jorge Morel's long and distinguished career has made him a legendary figure amongst guitarists. He is renowned as 'a consummate and virtuoso artist' (Guitar Magazine) whose music is notable for its blend of colourful Latin American vibrancy rooted in the popular folk-music of his early life in Buenos Aires, and North American sophistication. From gently lyrical pieces such as the Milonga del Viento to the life-force of the dance in works such as Giga Criolla and Otro Tango, and the more classical Sonatina, this programme is a true reflection of the amazing variety of Morel's creative output. Turkish guitarist Celil Refik Kaya is a prize-winner of a number of international competitions, including First Prize at the 2012 JoAnn Falletta International Guitar Competition.

Highly recommended in every aspect