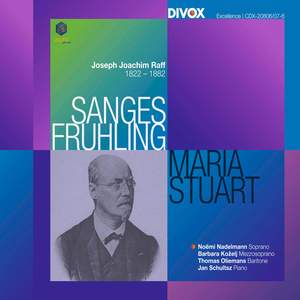 Joachim Raff, born 1822 in Switzerland, was an important composer of the 19th

century. Franz Liszt – whose assistant he was from 1850 to 1856 - had great benefit from Raff’s talent for instrumentation. He had influence e.g. on Tchaikovsky, Mahler, and Debussy. Two world premiere recordings: Sanges-Frühling (Springtime of Song) Op. 98, a collection of 30 compositions for voice with pianoforte, written between 1855 and 1863, is a true discovery, followed by the cycle Maria Stuart Op. 172 (12 songs), written in 1872, which takes us back to the busy 16th century. The Swiss soprano Noëmi Nadelmann is a multifaceted and fascinating singer of the classical music scene, with stunning charisma, musical expressivity and dramatic versatility. Barbara Koželj, lovenian mezzo-soprano, is a true musician, gifted with a ravishing voice and real craftsmanship; she is a dedicated singer, famous for the warmth of her voice and noble presence. The Dutch baritone Thomas Oliemans had his Salzburg Festival debut in 2005 and sung under conductors like K. Nagano, E. de Waart and R. Chailly. The Amsterdam native Jan Schultsz is active as a conductor, chamber player, song accompanist and festival director.