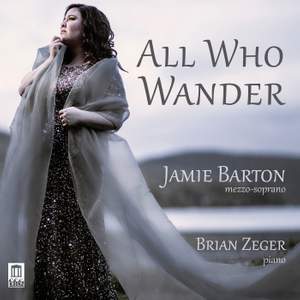 Barton seems now to be the equal of any dramatic mezzo before the public. The great element which has enabled her rise to stardom is, of course, her voice-large, rich, fully controlled...These... — American Record Guide More…

No. 2. Kyssens hopp (Kiss's Hope) (version for voice and piano)

Interview,  Jamie Barton on All Who Wander

Katherine talks to the American dramatic mezzo about her debut recital-disc of songs by Mahler, Sibelius and Dvorak.

“The world has been waiting for this voice for a long time – one that reminds you of how capable the human voice is of creating something of absolute beauty. Jamie pours all of her heart into every phrase of this deeply personal debut album. You will be utterly transported.” – Joyce DiDonato

Mezzo-soprano Jamie Barton burst upon the global opera and concert scene in recent years after having won many of the world’s most prestigious prizes for vocal excellenceand accomplishments. Delos has scored a major coup in releasing her debut album.

Jamie’s well-chosen program of late-Romantic repertoire begins with eight of Gustav Mahler’s finest lieder – including his wonderful Five Rückert Songs – before treating us to the rare delights of Antonin Dvořák’s song cycle Gypsy Songs. Her album concludes with even more seldom-heard selections from the many lovely Swedish-language songs of Finnish master Jean Sibelius.

Barton seems now to be the equal of any dramatic mezzo before the public. The great element which has enabled her rise to stardom is, of course, her voice-large, rich, fully controlled...These are some of the most beautiful recordings I have ever heard. Anyone who loves the human voice should own this.

A gorgeous debut from the 2013 Cardiff Singer of the World. Her rich, soulful mezzo draws out Mahler’s dark colours and soars in Sibelius’s snowy miniatures.

The voice is rich, generous and vibrant, big but beautifully controlled, impeccably smooth throughout its range. It’s the sort of instrument you could listen to all day, in any sort of repertoire...The disc’s highlight, though, is the Sibelius, in which the mezzo pours her heart into grand, soaring accounts of some of the composer’s most seductive songs.

A captivating and well presented album

The extraordinary voice provides pleasure up and down its range – and throughout this recital.

She boasts an expansive, robust vocal sound, tinged with richly varied colors, and she deploys it with a distinctive combination of heroic power and tender intimacy...Perhaps most striking is the assortment of six Sibelius songs, each one delivered like a personal communique.

As easily as Barton can envelop you with sound, she can also grab you by the gut, and propel you deep into the emotional heart of music’s great mysteries. It is the emotional depth of Barton’s artistry that sets her apart from other singers blessed with exceptional voices.

Perhaps the song on the record which encapsulates best what Barton can do is Sibelius’ “Säv, säv, susa”. She conveys its arched structure from repose to violence and back again with real conviction, and the final long vowels are unbelievable.

With a rich, opulent instrument that puts you in mind of the great Stephanie Blythe, she’s a thoughtful, dramatically attuned artist whose debut recording heralds great things. … The Sibelius miniatures are the real winners on this disc, showing off Barton’s evenly produced, gleaming sound, as well as her innate gift for communication.