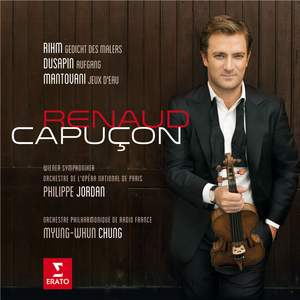 The more exciting music is often in the orchestra, but it’s a tribute to Capuçon’s skills that, like both of the other works it is completely under his skin — BBC Music Magazine, January 2017, 4 out of 5 stars More…

Firmly established as one of the world’s greatest violinists, Renaud Capuçon career both on the stage and as a recording artist has spanned a wide gamut of concerto repertoire, chamber music and recitals. He has a reputation for impeccable performances and fine interpretations of classics and lesser-known repertoire, from his most recent albums with critically-acclaimed readings of the Bach Violin Concertos and the Vasks Violin Concerto, and a recital disc with Khatia Buniatishvili, to the Beethoven / Korngold and Brahms/Berg concertos, Renaud has become known for the breadth of his repertoire, his world-class chamber music partners, and the quality of his playing.

The more exciting music is often in the orchestra, but it’s a tribute to Capuçon’s skills that, like both of the other works it is completely under his skin

Rihm’s Gedicht des Malers is his sixth violin concerto, and imagines the soloist as an artist’s brush, painting a portrait of Ysaÿe. It packs a remarkable series of moods into its 15 minutes…it is sumptuously played, and Rihm gives the soloist space for that, in language that is comfortably aristocratic

All three of these violin concertos were composed expressly for Renaud Capuçon, and all take his fiercely impassioned lyrical playing as their starting point...But it’s Pascal Dusapin’s Aufgang that provides the real substance here, and comes the closest to a traditional three-movement concerto.