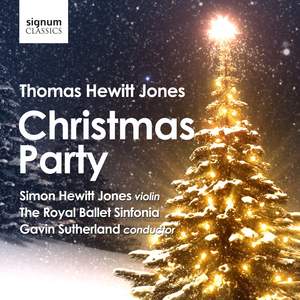 British composer Thomas Hewitt Jones (former BBC Young Composer of the Year) and his brother, acclaimed violinist Simon Hewitt Jones, collaborate on their first Christmas violin concerto. Titled 'A Christmas Party', the concerto is based on well-known Christmas themes, and provides a pot- pourri of festive music to make the season sparkle. As well as the concerto, the release also includes one of Hewitt Jones’ seasonal choral works 'Child of the Stable’s Secret Birth', performed by the Choir of Clare College, Cambridge and the Clare Lane Ensemble alongside a Christmas version of 'Cameron's Lament' - Thomas's response to David Cameron's humming which became a viral hit online in July 2016.