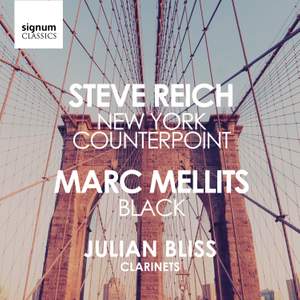 Julian Bliss joins in this year’s 80th birthday celebrations of the iconic American composer Steve Reich with a digital release of his minimalist masterpiece New York Counterpoint. Bliss performs all 12 parts on this new multitrack recording.

The work is paired with a composition by fellow American composer Marc Mellits - a new arrangement of his piece 'Black' for two clarinets and bass clarinets, also performed entirely by Julian Bliss. Considered a protégé of Reich, Marc Mellits’s unique musical style has been described as an eclectic combination of driving rhythms, soaring lyricism, and colorful orchestrations that all combine to communicate directly with the listener.