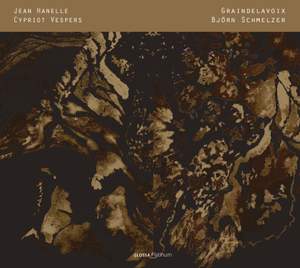 The little-known composer Jean Hanelle was a professional musician at Cambrai Cathedral and possibly later a teacher of Guillaume Dufay, also spending more than 20 years from 1411 onwards at the French court of Lusignan in Nicosia, Cyprus, a stay which involved him becoming the chapel master there. According to leading scholars, Hanelle was the author of the ars subtilior cycle of Magnificat-antiphons - the so called 'O'-antiphons traditionally performed during the last week of Advent - found in the Codex Turin J.II.9 and included in this new Graindelavoix production. Both the original plainchant and the Hanelle troped antiphons are presented in a series of nine pairs, between which the ensemble also performs an appropriate and context-defining selection of Maronite and Byzantine chants.

The Belgian ensemble, as always directed by Björn Schmelzer, performs these pieces, marked by a moving beauty, with one female and eight male singers, producing another of their peculiar and intriguing soundscapes. These Cypriot Vespers come with an interview with Björn Schmelzer carried out by Anne-Kathryn Olsen, a selection of late 19th-century photographs taken in Cyprus by John Thomson, and the first English translation of the antiphons, made by scholar Jeannine De Landtsheer from the University of Leuven.

Cycle of nine 'O'-Antiphons for the last week of Advent, both in their reconstructed plainchant versions and Jean Hanelle’s troped versions, plus five pieces from the Maronite and Byzantine traditions.