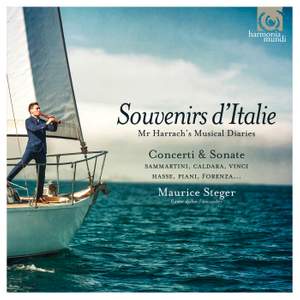 Charting some unfamiliar territory in the flautino concertos of Sammartini and Montanari or the recorder sonatas of Fiorenza and Piani, Steger’s pure, vocal tone captures the jauntiness and lilt... — BBC Music Magazine, March 2017, 5 out of 5 stars More…

“Naples is the capital of the musical world”, wrote Charles de Brosses in one of his letters from Italy from 1739/1740. He also wrote “Naples is the sole Italian city that seems truly a capital…” and this was not an exaggeration: it was the largest city in 17th century Europe and possessed four conservatories. Musicians trained there spent most of their lives in the service of sovereigns and aristocrats in other major European courts, such as Paris and Vienna. During their lifetime, they were internationally regarded among the finest exponents of their art. and their music adds an entirely new dimension to the history of Italian instrumental music. That variety of tastes and colours is the hallmark of this recording devoted to the staggeringly virtuosic music for recorder brought back from Italy by Count Harrach [the Austrian diplomat Aloys Thomas Raimund], who served as Hapsburg viceroy in Naples from 1728 to 1733. Hasse, Vinci, Sammartini, and the less familiar names of Antoni, Fiorenza, Leo and Sarro represent these souvenirs of a six-year gilded exile, which is preserved in his collection of precious manuscripts.

Charting some unfamiliar territory in the flautino concertos of Sammartini and Montanari or the recorder sonatas of Fiorenza and Piani, Steger’s pure, vocal tone captures the jauntiness and lilt of lively moments, while slow movements are imbued with lyricism and the florid ornamentation we have come to expect in his performances

Steger is never dull, and while he may go for maximum velocity and more-is-more ornamentation, his attack and articulation are always varied, repeats are never the same and there’s warmth and thought behind his every note. It’s also heartwarming to behold the clear pleasure he takes in his zinging accompanying ensemble…it’s another Steger cracker of a recording. Well worth seeking out.