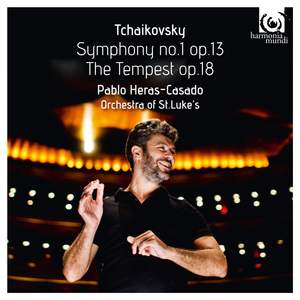 The First Symphony makes a beguiling start with magical restraint, the wind phase properly articulated and the second theme allowed to billow in a way that suggests a fine-tuned Tchaikovsky interpreter... — BBC Music Magazine, February 2017, 3 out of 5 stars More…

I. Dreams of a Winter Journey (Allegro tranquillo)

Pablo Heras-Casado enjoys an unusually varied conducting career—encompassing the great symphonic and operatic repertoire, historically informed performance and cutting-edge contemporary scores. He has served as Principal Conductor of Orchestra of St. Luke’s since 2011, now extended to September 2017. OSL began as a chamber ensemble based at The Church of St. Luke in the Fields in Greenwich Village. Today, St. Luke’s Chamber Ensemble consists of 21 virtuoso artists who perform a diverse repertoire and make up OSL’s artistic core. harmonia mundi are proud to release OSL's debut album for the label featuring two of Tchaikovsky's earliest notable works, both of which are dramatic and vibrant: Symphony No. 1, 'Winter Dreams' and 'The Tempest', a sprawling and turbulent seascape.

The First Symphony makes a beguiling start with magical restraint, the wind phase properly articulated and the second theme allowed to billow in a way that suggests a fine-tuned Tchaikovsky interpreter … Heras-Casado makes you wonder at the incredible refinement of Tchaikovsky’s most daring symphonic fantasia before Manfred, from the 13 part strings and eerie modulations of Prospero’s seascape to the beauty of the love music

The work he does has its place and time...There is throughout the symphony a continence of rhetoric that may appeal to anyone not unshakably attached to Golovanov, Svetlanov and their kin...Heras-Casado has me wondering about a new wave of Tchaikovsky performance: shunning hysteria and crocodile tears, painting pictures, telling stories.

[there is]...tangible chemistry between the Spaniard and his New York-based Orchestra of St Luke’s. They explore two very different sides to Tchaikovsky on one disc: a lean, lithe performance of the First Symphony, Winter Dreams, and an excitingly baleful take on the not-very Shakespearean tone poem The Tempest

You can hear the New York ensemble’s roots as a chamber orchestra, lithe and responsive, the chill of those glittering strings warmed by the wind choir, and Heras Casado’s pacing is spot on for me, never trying to make too much of this wintry symphony. The land of desolation and mists’, the slow movement, is especially successful