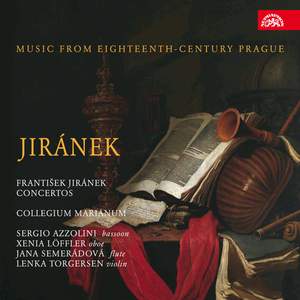 I. without tempo indication

It was not long before the baroque composer and violinist in Count Morzin's court orchestra, František Jiránek, received the moniker of a "Czech Vivaldi". Musicologists discovered him only recently and his works are gradually being identified, as his authorship is disputable in some cases. This is because Jiránek was a gifted pupil of his teacher in Venice and his works thus bear strong Vivaldian influence. Musicians are also becoming more and more enthusiastic about the newly discovered composer - besides the ensemble of Jana Semerádová, his promoters include the phenomenal bassoonist Sergio Azzolini, whose unique recording of Jiránek's concertos (SU40392) was received with great acclaim, and the renowned oboist Xenia Löffler. Despite all unclearness in the attribution of the works and some unusual features (such as the incorporation of the rarely used viola d'amore into Jiránek's Triple Concerto in A major), listeners are certain to find lively and virtuosic music on this recording of hitherto unheard compositions in top-class interpretations: a truly opulent baroque feast.

Collegium Marianum…play with punch and attention to detail