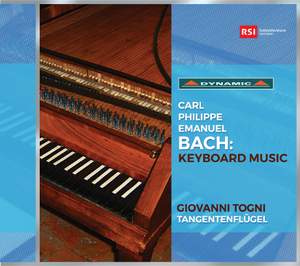 The pieces on this recording are performed on a rather unusual instrument, but one which enjoyed some popularity during the second half of the 18th century: the tangent piano (Tangentenflügel). Its strings are struck by wooden slips without any soft coverings. In place of the rotating motion of a conventional piano’s hammers, the tangent piano has strikers that move perpendicularly to the strings, like harpsichord jacks.

Franz Jakob Spath (1714-1786) and Christoph Friedrich Schmahl (1739-1814) were the most famous makers of the Tangentenflügel. The instrument featured on this recording belongs to a Swiss private collector and has survived virtually intact. The tangent piano was able to satisfy the taste of performers still fond of the crystal-clear sounds of the harpsichord, while at the same time offering the expressive nuances of the fortepiano and the tone-colour variations of different registers, which became fashionable in Europe from the 1770s onward.

The six books of Sonatas, Fantasias and Rondos, which bear the subtitle 'Für Kenner und Liebhaber' (for masters and amateurs), were published between 1779 and 1787. These innovative pieces stand among Carl Philipp Emanuel Bach's greatest accomplishments. Though sometimes quite demanding for the listener, the music always has an immediate, expressive and emotional impact, which makes the six books of Für Kenner und Liebhaber by the “Hamburg Bach” one of the most refined collections of keyboard pieces ever composed.

Apart from offering a nice cross section of Carl Philipp Emanuel Bach's keyboard music, this disc allows us to become acquainted with a highly fascinating instrument, tailor-made for the sensitive style of the Hamburg Bach.